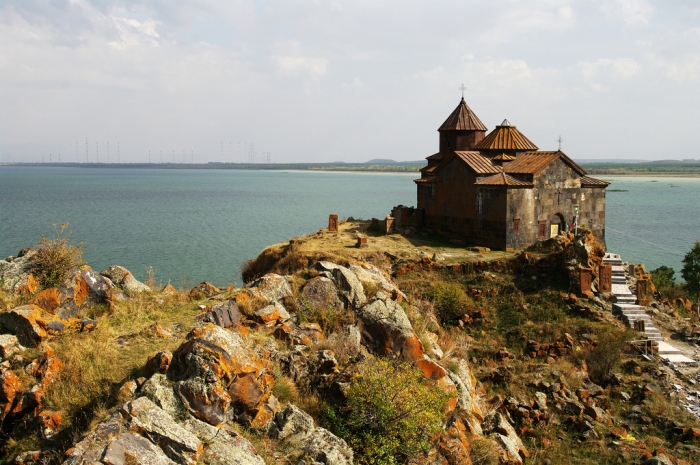 Hayravank Monastery is located in Gegharkunik Region, to the southwest shore of Lake Sevan. The complex consists of three buildings: a church, chapel and gavit. There is a small cemetery surrounding the monastery including a number of cross-stones. Not far from the monastery a Bronze Age settlement have been found which has a medieval fortification walls. The archaeological excavations discovered a black polished vessel of the early Bronze Age, as well as Iron Age items such as weapons, vessels and fireplaces. Hayaravank was built in the late 9th century with the small chapel added in the 10th century. The church is a quatrefoil cruciform central-plan structure with four semi-circular apses that intersect to create squinches for the octagonal drum and conical dome to stand above. It has two entrances, one from gavit and the other from its exterior on the south side. The original drum and dome had collapsed completely: their current rebuilt form dates from a restoration undertaken between 1977 and 1989.

View the embedded image gallery online at:
http://eltravelclub.am/en/attractions/temples-churches-castles/item/300-hayravank#sigProIdb1d55e0985
back to top